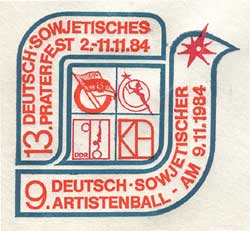 Prater survived the major bombing raids virtually untouched. The Soviet military administration ordered the opening of a cultural establishment in Prater, and the first hungry dancers and clowns appeared as early as the summer of 1945.

Berlin's Volksbühne moved to Prater in 1946. This was before the renovation of the Volksbühne theatre which still stands at Rosa-Luxemburg-Platz.

The premiere of Maxim Gorky's play »The Lower Depths« was completely sold out. The crowd was eager to see both a good play and actor Ernst Busch. Burlesque shows and cinema were also on the schedule, specifically those which were in line with the political doctrine of the GDR.

The first Ernst Thälmann film made by DEFA, the East German film studio, premiered in Prater. The governing Socialist Unity Party (SED) and the Socialist German Workers Youth regularly held conferences on the premises. Enormous amounts of concrete were used to erect an outdoor stage.

The beer garden developed its own dynamic existence. People came to have a drink and to dance in the open air. In 1967, Prenzlauer Berg's city council decided to establish Prater as »Kreiskulturhaus«, a government funded cultural institution.

Surprisingly, Prater was not owned by the government like a regular restaurant. Instead it was still in private hands. An unusual setup indeed, the waiting staff and chefs were classified as workers of the cultural sector, thus escaping the iron grip of the restaurant regulators.

Various arts and crafts studios developed in the buildings adjacent to the garden. It included pottery and music in many guises. Zantke, in his earlier-mentioned Prater history, remarked that »folk art creators from the area found a place to practice and perform.«

On Wednesdays a three-man combo played at an old folk's dance. There were soapbox races, boxing tournaments and children's festivals. Every Sunday the high-decibel »Sunday Melody« radio broadcast tested the patience of the neighbours.

Alongside German-Soviet Prater festivals and other Soviet-zone events, alternative art forms also found a space in Prater towards the end of the East German regime.

Artists got together for heavy drinking sessions in the beer garden after art openings at Prater Gallery.

Considerable political significance can be attached to the legendary production of the Zinnober theatre group which had been banned by the communist party from performing in the neighbourhood. But the most popular cultural attraction remained beer drinking which always drew the biggest crowds.