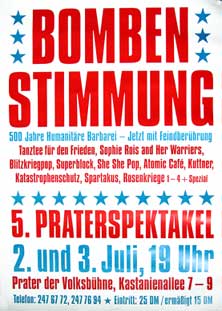 Everything changed again with the fall of the Berlin Wall. The city council was dissolved and »Kreiskulturhäuser« became a thing of the past. Prater experienced a second youth. Everything was possible, but it didn't last for long.
Whether Donovan was standing on stage or models were strutting across the concrete, the motto was 'anything goes' and a coherent concept wasn't evident.

The new entrepreneurs were involved in opaque activities, the staff was kept in the dark about their future and somebody was still selling beer in the outdoor area.

A huge construction project began with the aim to make the theatre functional again. Millions were spent without the venue being completed.

Berlin's Senate handed over Prater to the district of Prenzlauer Berg. In 1994 it passed the building over to the Volksbühne which had already made a brief appearance there back in 1946.

The Volksbühne breathed new life into the jaded ensemble with a theatre spectacle that took over the entire garden, the big stage and the other spaces.

There were readings featuring the East German writer Peter Wawerzinek in the garden and Frank Casdorf's productions were staged in the theatre (in front of an audience limited to 99 people by the building inspectors). Prater started to come back to life.