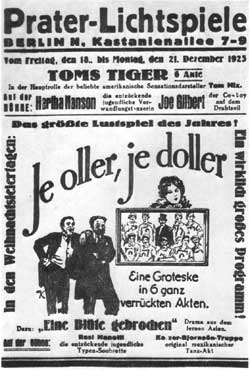 The area had gone through big changes. The construction of apartment buildings had been completed, the fire station on Oderberger Straße was brand new, so too the St. Elisabeth nursing home behind Prater.

The public continued to come to variety shows and open-air concerts. A new medium had taken off in the performance hall – film. But many had less money to spend and the younger generation preferred the cafés and cabarets in the city centre.

Schultheiß-Patzenhofer had long swallowed the Pfefferberg brewery and Martha Kalbo was faced with increasingly unpleasant negotiations with the new owner.

In 1923, Prater surrendered its theatre license. Martha Kalbo was demoted to the role of publican and Schultheiß-Patzenhofer appointed another general leaseholder in her place.

These changes were strategically driven because the new man in charge was also responsible for a Berlin-based motion picture company. The Kalbos left Prater – an establishment that they had built up, but not actually owned for years. Film became the new prime attraction.

Movie stars Hans Albers and Rudolph Platte made appearances in Prater and Paul Lincke was still conducting his big orchestra in the garden in 1935. Similar to many other establishments, Berlin's Prater closed when Adolf Hitler declared all out war.